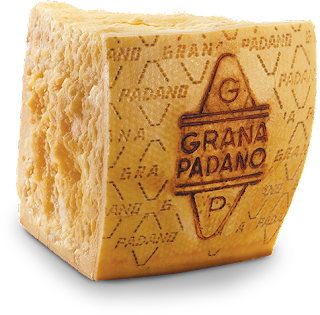 It's no secret the whole world loves a good Parmesan cheese. Notice I said “good:” the unpalatable, processed, sawdust-laced crap in a can in no way qualifies as “good,” much less as cheese. No, I'm talking about the real deal; a tangy, salty, perfectly aged, delightfully nuanced hard Italian grating cheese like Parmigiano-Reggiano. Or the far lesser-known Grana Padano.

Come on. Face it. Parmigiano has a better press agent. Everybody has heard of the cheese Mario Batali and others tout as “the undisputed King of Cheeses.” Even if you've never seen a wheel or a wedge of the stuff, you've probably at least heard of it, because it's the cheese everybody talks about. Alas, nobody outside arcane Italian food circles says much about Grana Padano. I've walked into many a specialty cheese department at places like Fresh Market, Whole Foods and Trader Joe's and asked for Grana Padano and gotten blank stares as if I'd just asked for something really weird in Italian. (You are indeed fortunate if you live in the Southeast where Publix holds sway: they not only know what Grana Padano is, they actually sell it.) And even among those who are aware of the existence of Grana Padano, it is all too often thought of and described as Parmigiano-Reggiano's “poor cousin” or as a “poor man's Parmesan.” And that's the kind of thinking that's making legal waves across the pond.

See, there's this American soap opera called “The Bold and the Beautiful.” Created by a couple of Chicagoans I used to know back in the '60s (Bill Bell and wife Lee Phillip) it debuted on CBS in 1987. I saw an episode of it once about twenty-five years ago. I was being held captive in a waiting room and the TV was on and there was this woman who couldn't live without her “soaps” and......well, there it was. Anyway, it's currently the subject of a lawsuit being filed in Italy by the consortium that produces Grana Padano. Seems one of the characters on the show dissed da cheese. Here's how it went down: The guy, one “Charlie Webber” (played by actor Dick Christie), sets out to make dinner. At some point, he realizes that he accidentally bought Grana Padano instead of Parmigiano-Reggiano. (Obviously they have better stocked cheese departments in Los Angeles, where the show is set.) Visibly upset, he cries, “Oh no! I got Padano!”, after which he rushes out to buy the “right” cheese. (Note to the writers: most people who don't use the full “Grana Padano” moniker usually call it “Grana” rather than “Padano.” Just sayin'.) And the whole thing has the Grana Padano people in Italy up in arms.

Stefano Berni, general director of the Consorzio Tutela Grana Padano, sums up the consortium's ire: “What disturbed us was the dramatic way the cheese was denigrated. The actor reacted to it so negatively, almost as if he had poison in his hand.” Berni described the scene as a "gratuitous lack of respect." Lawyers for the cheese (not to be confused with cheesy lawyers) agree that their product has been actionably dissed. But they go a step beyond claiming mere defamation of the Grana Padano brand. The consortium’s legal beagles also aver that US advertising rules were violated because the hapless comparison happened within the course of the program itself, not during a commercial break. Obviously it's okay to take down the competition in a commercial; that's kind of the point of the exercise. But apparently it's a no-no to promote one product over another in the scripted part of the program. And I suppose saying, “Oh no! I got Padano!” with a look on your face that conveys revulsion could be construed as defamatory. And since the soap airs in a hundred countries and boasts a viewership of between 300 and 500 million, that's a pretty substantial negative impact.

Both Parmigiano-Reggiano and Grana Padano are hard, granular cheeses. In fact, the word “grana” is Italian for “grain.” Both are made from cow's milk and the production process is quite similar. Cows are milked twice a day. The milk from the evening milking is skimmed and mixed with the whole milk of the next morning's milking. The mixture is pumped into copper-lined vats and coagulated; the resulting curd is cut to produce granules about the size of rice grains, which gives the cheeses their characteristic texture. The first major variance is in the aging process: Parmigiano-Reggiano is aged for a minimum of twelve months. Older varieties (stravecchio) can be aged as long as thirty-six months. Grana Padano, on the other hand, is commonly aged for only eight months with older varieties going for as long as twenty months. The “younger” Grana Padano cheeses are less crumbly in texture and somewhat milder and less complex in flavor than their longer-aged relatives.

The other major difference is, as I said, location. Production of Parmigiano-Reggiano is strictly regulated. The name itself is protected by law and manufacture is limited to the provinces of Parma, Reggio Emilia, Modena, Bologna (west of the Reno) and Mantua (south of the Po).

Grana Padano is produced across a much wider geographic area. The Consorzio Tutela Grana Padano consortium includes 130 producers, located in Lombardia, Veneto, Emilia Romagna, Trentino Alto Adige, and Piemonte. Even though Parmigiano is better known, the Grana consortium sells almost fifty percent more product worldwide and it is generally sold at a cheaper price, making it an attractive substitute for Parmigiano-Reggiano. Italians know the difference and are careful to distinguish between the two cheeses, even though they are often used interchangeably in recipes calling for grated Parmesan. Taken as stand-alone cheeses – on a cheese plate, for example – the differences are more noticeable. But when grated and mixed into a recipe, not so much.

So now the consortium's Italian lawyers are looking for an American law firm to file a compensation claim. (Gee, that shouldn't be too hard.) Consortium reps say it's too early to quantify the damage in commercial terms but they aren't really looking to make a buck (euro?) out the affair. Berni says, “we are not doing this for money. We plan to donate any proceeds to a pediatric hospital in Haiti that we support.” It's the principle of the thing, right? (Hmmm.....on second thought, maybe that's why they haven't found an American law firm yet.)

In the meantime, go out and buy some Grana Padano. If you can find it. I'm crazy about the stuff and use it whenever and wherever I can. The Grana I bought the other day retails for fifteen dollars a pound as opposed to the twenty dollars a pound for which Parmigiano commonly sells, so guess which one I use if I need a larger quantity. If I'm really using a lot of grated cheese in a dish, sometimes I'll opt for a good quality domestic Parmesan. It's even cheaper and the flavor is acceptable when mixed with other ingredients. I buy a block and grate it myself because any pre-grated cheese is quick to lose flavor and quality. The only level to which I unequivocally will not stoop is the use of the aforementioned cheese-flavored cellulose that comes in convenient cardboard or plastic containers. Imagine a look of total revulsion on my face as I say, “Oh! I got the cheese-flavored crap in a can!” Not that that would ever happen. But if it did and the purveyors of the product would care to sue me, bring it on. My taste buds and I are more than ready for our day in court.
Posted by Ron James at 11:37 PM