How To Make Jarred Tomato Sauce Taste (Almost) Like Homemade

If You Can't Make It, Fake It 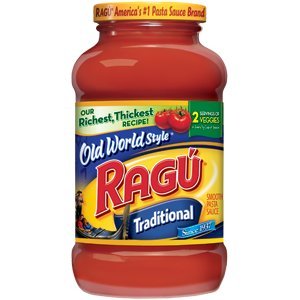 I've got bunch of recipes for salsa di pomodoro (tomato sauce) upon which I have come to rely over the years. They range from a quick “Five Minute” sauce I …..ahem....acquired from Canadian celebrity chef David Rocco to a good old traditional long-cooking sauce that requires hours to prepare. I've even got a raw sauce, or salsa cruda, I use on pizza. But every so often, in a move I'm sure sends shudders all the way back to my Italian second-great-grandmother, I have been known to grab a jar of Ragu out of the pantry. Calm down, nonna! I only said I grabbed a jar of sauce, not that I actually served it straight out of the jar.

Obviously, homemade is always your best bet. But I realize there are a lot of people out there who, for a lot of reasons, turn to the grocery store shelf for their pasta sauce. And that can be okay as long as you don't just dump, stir, and serve. In the spirit of “if you can't make it, fake it,” let me offer a few tips on how to make store-bought sauce taste sorta kinda almost like homemade.

First and foremost, buy decent sauce. I like Ragu but Prego is okay, too. They are a good middle-of-the-road balance between the “high end” sauces with the ridiculous price tags and the bottom of the barrel stuff you buy for ninety-nine cents a can. I generally avoid jars of super-cheap supermarket brands and I won't even touch anything in a can (lookin' at you, Hunt's.) The reason for this is that most of these products are made from low quality ingredients and contain lots of preservatives, salt, and sugar to make them taste like anything edible. You can usually hit a “2 for $5” sale or something on Ragu and make out pretty good in the cost department, so just stay away from the really cheap stuff.

Next, I buy the plain “traditional” version of Ragu/Prego. Whatever you do, don't buy anything “flavored” with “meat.” Same thing goes for mushrooms or vegetables or any other ingredient added for your convenience. Just buy the plain stuff and add your own extras, okay?

Now after you open the jar and pour the sauce in the pan, get ready to do some serious “doctoring.” In the great French tradition of mise en place – which the Italians probably invented – have all your ingredients stove-side and ready to go. They will include olive oil, red pepper flakes, garlic, tomato paste, dried oregano, and fresh basil. Also have some sugar, some salt, some lemon juice, and some butter handy as well as a little bit of the water in which you are cooking the pasta.

So, turn the heat on under your pan to low or medium low. You want to simmer the sauce, not boil it. Add in just a glug or two of olive oil. You're looking for a layer of flavor here, not a greasy sauce. In fact, this whole exercise is about building flavors, which is what Italian cooking is all about in the first place. When you make sauce from scratch, you build layers of flavor. This is kind of a shortcut. I know, nonna! Please stop crying!

Add some red pepper flakes, to taste. In Italian, that's quanto basta, abbreviated qb, and loosely translated as “just enough.” Remember, some people have a higher tolerance for heat and spice than others. Taste as you season so your sauce doesn't go arrabbiata on you and burn out somebody's taste buds. Qb is the key. Quanto basta.


All right. Now it's time for some tomato paste. In spite of what the name implies, tomato paste is not an adhesive used to glue tomatoes together. Tomato paste is concentrated tomatoes that have been skinned, seeded, strained and then cooked down until they become.....well, paste-like. Its principle purpose is to punch up the tomato flavor in sauces, soups, stews and the like. And that's what we're using it for here; to amp up the generally bland taste of jarred tomato sauce. Again, quality counts. Stay away from the cheap stuff and look for product made by Cento – my favorite – or Amore, another decent Italian brand. Both of these come in tubes, kind of like toothpaste. The great thing about tubes as opposed to cans is that you can use as little or as much as you need, screw the top back on the tube, and stick it in the fridge for later use. Can't do that with a can. And since all you'll generally need is a tablespoon or two, the advantage should be obvious. So, squeeze out that tablespoon or two and stir it into your simmering sauce.

Garlic is optional and depends on your choice of flavor profile. Sometimes I use it and sometimes I don't. When I do, I opt for fresh garlic over some form of dehydrated powder or granules. Watch “Clemenza” make sauce in “The Godfather” or watch “Paulie” slice garlic with a razor blade in “Goodfellas.” Then do what I do: grab a microplane grater and grate up a clove or two. It's a lot easier. Jarred sauces usually have some onion and garlic in them and if what's in there is okay for your taste, leave it at that. Otherwise, use some fresh garlic as an additional layer of flavor.

Again, there's usually some Italian seasonings in jarred sauces: just usually not enough. So stir in a bit of oregano. Just a pinch; a little goes a long way especially if you're using dried oregano, which can be pretty potent. When it comes to basil, I prefer fresh and I add it toward the end of the cooking process so that it retains its fullest flavor. Taste, taste, taste. Don't just toss stuff in the pot. Taste as you go.

Which brings me to the next point. I mentioned sugar, salt, lemon juice, and butter. You may need them and you may not depending on your taste. Sometimes the manufacturer will add sugar to counter the natural acidity of tomatoes. You don't want to add more or you'll make the sauce too sweet. Taste it first and if it's too acidic, add a pinch of sugar. Conversely, if it's already too sweet, add a little lemon juice. And salt can help balance both flavors. Once again, it's all about tasting as you go.

What about the butter? In chef-speak, it's called “finishing” the sauce. Or maybe you've watched one of those fancy cooking shows and heard the chef talked about “mounting” the sauce. Get the obvious image out of your mind. The French term for finishing a sauce with butter is “monte au beurre,” and it involves adding few pats of cold butter to the warm sauce in order to make it richer and shinier and just a little bit more flavorful. You don't have to do it, but you'll impress your family and friends with your knowledge of classic technique if you do.

Another little add in I'm fond of is one of those Italian “secrets:” Parmesan cheese rind. Now if the only way you ever buy your Parmesan cheese is pre-shredded in a package or (shudder) in that execrable green plastic or cardboard “can,” you've probably never even seen the rind from a hunk of real, authentic Parmigiano-Reggiano. And that's a pity that borders on a culinary criminal offense. But that's a rant for another day, so if you do actually use the real stuff, or even a reasonable domestic facsimile thereof, save the rind – you can collect a bunch of them in the freezer – and add it to jarred tomato sauce for yet another layer of real Italian flavor. Just let it sit and simmer in the sauce. But remember to remove what's left of the rind before you serve your sauce. I forgot once: explaining the misshapen, cheesy, sauce-covered lump to the person who got it on their plate was rather embarrassing.

Finally, I mentioned cooking water. This is the ultimate Italian “secret ingredient;” an ingredient known to generations of nonne. And it's just stupid simple. Before you throw away the salty, starchy water in which your pasta has been boiling for the last eight to ten minutes, dip a cup or ladle into the pot and reserve a little bit of it on the side. Not much. A half-cup or so is fine. Then, as you reach the final stages of preparing your sauce to receive the pasta, spoon in just a little of the reserved water. It's a trick that will almost magically finish developing the flavor and texture of your sauce.

There you have it. Is it more work than “dump and stir?” Yep. But it's also less work than scratch-made and when done right can be almost as good. Ouch! Nonna, stop that! I said “almost.” I know, nothing is as good as the sauce you spend hours lovingly preparing, but give people a break, okay? At least they're trying. Really, nonna, put down the wooden spoon! Please?

Ciao for now and buon appetito!