If You're Not Using Kerrygold Butter, You Should Be

Banned In Boston? No, But Once Proscribed in Pewaukee 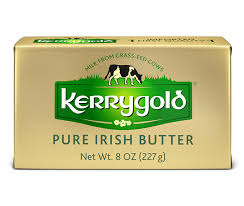 Anybody who has ever read anything I've written on the subject knows of my “love/hate” relationship with butter and margarine: I love butter and I hate margarine. It's not just because rich, creamy, delicious butter and I are both products of America's Dairyland. No, it's because margarine was developed by a nineteenth century French chemist as a cheap, artificial substitute for butter. And to me it still remains just that: a cheap, artificial substitute with all the taste, appeal, and nutritional value of the plastic tubs in which it is often sold. Blecchh!

In the interest of transparency I must admit there is a dark side to my history with margarine: My father bootlegged the vile stuff back in the 1950s. Yes, it's true. Oh, the shame of it! Now you're probably asking, “Huh? How do you 'bootleg' margarine?” Well, in the time and place I was born (Wisconsin in the '50s) margarine was illegal. You couldn't buy or sell it in stores. So my dad decided to supplement his income by emulating his father who ran moonshine back in the 1920s. He began taking orders from friends and family during the week and then drove over the nearby state line into Illinois on weekends where he'd load up the trunk of his car with contraband margarine – yellow dye packets and all – and sneak it back into the Dairy State. (Grandpa eventually got busted. Dad didn't.)

You know, I live in the South now and I have a hard time getting any traction with tales of my grandfather's bootlegging back in the '20s. Not when the person with whom I'm speaking probably has relatives who ran 'shine sometime last week. But when I tell them about my dad burning up the Midwest's version of Thunder Road with the trunk of his '56 Chevy Bel-Air loaded down with hot margarine.....well, that's deserving of instant street cred. But I digress.

I use butter for everything. Wait......as “Last Tango In Paris” comes to mind, let me rephrase that. (If you don't get it, Google it.) I use butter for any and all culinary purposes. I cook with it, bake with it, and use it exclusively at the table. Margarine has no place in my kitchen. No, I take that back: it might be good for greasing squeaky cabinet hinges. And I'm really picky about the butter I use. For decades I eschewed generic or store brand butters, refusing to subscribe to the erroneous “butter is butter” philosophy as I reached instead for “top shelf” brands like “Land O' Lakes” or “Challenge.” And then I discovered Kerrygold Irish Butter.

Kerrygold has been around in Ireland since the early sixties but its arrival on American shores came much later. In light of my previous allusion to the thriving margarine industry in Illinois, it's ironic that Kerrygold's introduction to the American market came through the Land of Lincoln in 1998. It was a tiny order but company officials in Dublin saw it as an opportunity to stick a foot in the door. And from that insignificant order of an exotic novelty product that was originally purchased to tie in to St. Patrick's Day, Kerrygold today sells a whopping twenty-three thousand tons of its product in the US every year, making it the country's second-best-selling butter brand, right behind the aforementioned Land O' Lakes and right up there with Challenge.

Is Kerrygold expensive? Damn skippy! About twice as much per pound as generic store brand butter. But you get what you pay for, right? And when it comes to taste, texture, and overall quality, Kerrygold is worth every nickel. Why? Glad you asked.

Kerrygold is a European-style butter (duh!). As such it has a higher butterfat content than typical American butter. Eighty-two percent to be exact. This higher butterfat translates into richer, creamier texture. Kerrygold butter also comes from the milk of grass-fed cows that are free of growth hormones. Why is “grass-fed” a big deal? Grass-fed butter contains five times more conjugated linoleic acid (CLA) than butter made from the milk of grain-fed cows. This is a thing because some studies indicate that CLA can effect numerous health benefits, including varying degrees of fat loss, in humans. Butter from grass-fed cows is also much higher in Omega-3 fatty acids and vitamin K2 when compared to butter from grain-fed cows. Of course, anything free of added growth hormones is always a good thing. And besides all the healthy stuff, butter from grass-fed cow's milk just tastes better.

Now, some ninnywhiners will protest that Kerrygold cows are not “100 percent” grass-fed. Puh-leese! About two-thirds of the land in Ireland is farmland and about eighty percent of that is lush, green grassland, the result of year-round temperate weather and moisture-bearing southwest winds. That's where the whole “Emerald Isle” thing comes from, you know? But it's not all sunshine and unicorns when it comes to the weather in Ireland, so those frolicking Friesian cows occasionally have to eat something other than fresh grass. They can graze to their stomach's content for up to three-hundred-twelve days a year on average, longer than just about any other cows in the world. But for the other fifty-three or so days, their diets have to be supplemented with silage. Big whoop. That's close enough to “grass-fed” for me.

The higher butterfat that gives Kerrygold its rich texture and appealing golden yellow color is also a baker's dream. Higher butterfat means less water content which means one very important thing when it comes to baking: flakiness, especially in pie crusts and pastries.

And, of course, as I mentioned, there's the taste factor. Coming as I do from dairy country, I know what butter is supposed to taste like. When my grandfather wasn't busy running a still, his regular job was as a butter maker at a local creamery. I've made my share of the stuff by hand-churning a little cream and adding a pinch of salt. Margarine's entirely bogus claims aside, nothing tastes better than fresh butter. American butter, even “the good stuff,” has suffered over the years as cost-saving, corner-cutting measures and cheaper ingredients have dulled the flavor. Not so with Kerrygold. It's still the real deal, made in the traditional manner. Folks in Ireland laugh when they hear Americans going gaga over the wonderful taste and quality of “fancy” Irish butter. It's just butter to them, the way it's always been. But don't take my word for it: try it for yourself. If you can't immediately taste the difference, drop me a line and I'll help set you up for a taste bud transplant.

Unfortunately, I don't generally use Kerrygold for everything in the kitchen. It's too expensive for commercial or restaurant cooking. Kerrygold doesn't sell in bulk quantities. I can't just nip over to the restaurant supply place and get it any cheaper than you can buy it at Walmart or wherever. I know professional cooks, myself included, who would love to use Kerrygold exclusively, but.......$$$. Like it or not, in the restaurant world, fewer dollars make more sense. So for commercial cooking, I rely on another “European-style” butter, Plugra. “Plugra” derives its name from the French “plus gras” or “more fat.” And it does, indeed, have a higher butterfat content than its common American cousins. BUT.....note the “European-STYLE” designation. Plugra may be European in style, but it's made in America by an American dairy consortium from milk produced by American dairy cows. By their own admission, “Dairy Farmers of America, Inc. is a member owned cooperative of more than 10,000 dairy farmers in 48 states. Currently, the milk and cream used to make our butter does not come solely from dairy farmers who certify that their cows are not being treated with rbST or artificial growth hormones.” (Thanks to blogging Chef Rob Endelman for that tidbit.) Still and all, it's a higher quality product than most other American offerings and I can just nip over to the restaurant supply place and buy it cheaper than you can at Walmart or wherever. But it still pales – literally and figuratively – in comparison to Kerrygold.

One thing I found really amusing about Kerrygold: up until very recently, it was illegal in Wisconsin. There are still laws defining, outlining, and restricting the use of butter and margarine in America's Dairyland. One of them, Wisconsin statute 97.176, originally enacted in 1953, pertains to the grading of butter at the state level by a “highly trained grader” on the basis of numerous flavor, body, color, and salt characteristics. This “graded” butter then was allowed to carry an official Wisconsin stamp of approval for sale within the state's borders. If you got caught selling unstamped or ungraded butter, you were looking at fines of between a hundred and a thousand dollars and six months in jail. The purpose, of course, was to protect local commercial product by freezing out artisanal and foreign competition. The statute wasn't much of a big deal and was pretty much overlooked and unenforced for decades. That is until ungraded, unstamped, foreign, and enormously popular Kerrygold came along. In 2015, somebody in Madison remembered the old law and outlawed Kerrygold, forcing consumers who wanted it to obtain it by less than strictly legal means. In other words, they had to bootleg it from Illinois and other neighboring states. My dad – gone now these many years – would have loved it. So in 2015, it was legal to sell margarine in Wisconsin, but not Irish butter. Lawsuits flew, but ultimately Ornua, the folks who make Kerrygold, agreed to comply with the state's draconian grading measures, and the golden butter in the golden foil wrapper made a welcome return to local store shelves.

Find out what the fuss is all about and go get some Kerrygold Irish Butter today. It comes in both salted and unsalted varieties and is available in stores nationwide – even in Wisconsin.